“Starstruck and Its Role in My Salvation“

The first Starstruck I ever read was Marvel Graphic Novel #13. I mention this to suggest the naivete of numbering Graphic Novels and because Starstruck has assumed more forms than most shapeshifters in comic history – from play, to flashback mini-comics, to radio play, to… Well, it’s complicated. (For more details, I recommend this Chronology.)

Starstruck was like nothing I’d seen (and I’ve seen things you people wouldn’t believe….) Weirdly, it may still be ahead of its time.

A month later, the generous Jim Edwards-Hewitt gifted me with the first issue of the Epic miniseries that followed the events of the Graphic Novel. Upon reading it, I sent Michael Kaluta (whom I had met previously on several occasions) a note offering my assistance should it be desired. Happily for me, that note (and its poorly drawn portrait of Brucilla “the Muscle”) is lost to history. Sadly, Starstruck lasted a mere 6 issues at Epic and by the time my note reached him, Michael and Elaine were bidding it a sad farewell. But not before they’d given Harry Palmer his own major storyline – with pieces that presaged some of the reality we now live in (Google goggles anyone?)

By the time Elaine and Michael were given a chance to revisit Starstruck in 1990, they had sufficient faith in my knowledge and passion for their project to entrust the “About Last Issue” blurbs to me. But rather than continuing the tale forward in time and space, they did something far more interesting: they expanded the story – literally adding frames, words and sometimes whole sequences, between the originals. This was reading between the lines in a very real sense! And I relished the opportunity to see the story unfold, to try and ferret out the details and relationships that each unreliable narrator were showing, telling, hiding or lying about. It was a joy!

Many years passed and, during a particularly disagreeable freelance gig with one major corporation or another, it occurred to me that I’d really rather work with people of Integrity. So I asked Michael to send me some of the black and white pages he’d created for the Dark Horse run that had never been painted. His choices were… ambitious.

The results were strong enough that Michael sent them out to his nearest and dearest. (Which is how I got the nod from Dave Stevens to paint his drawing of Spiderman). One thing leads to another, but what that other will be is seldom obvious.

Several years on, I got THE CALL.

Starstruck was on, this time from IDW. Michael would be making the pages 17% taller and I would be painting the lot.

One of the unexpected aspects of this remastered expansion of the expanded tale was the need to relocate word balloons and caption boxes, as well as create new word balloons and sound effects. There was no budget for Todd Klein or John Workman to reprise their work, so it was my bailiwick. If there is any better lesson in type placement and flow, I’ve certainly never encountered it. In a few cases I had to turn to local expert (and legendary X-Men letterer) Tom Orzechowski for the most elegant and subtle solution.

But other times, the answers spoke for themselves (much like the garrulous Brucilla) and the resultant cascade of verbiage flowed between panels. I spent days working on important, if intentionally incomplete, UI.

And when that first HUGE 1/3 of the total Starstruck experience was collected by IDW, there were… gaps. {Gasp!} Places where the story’s double-page art spreads needed to be properly set up and where the narrative (never seen in a single volume before) wanted reminders and costume changes. In one case, it was all about conversing with Elaine and stealing from Michael, and in another, I had the honor of painting and lettering an all-new spread from Michael with all-new words from Elaine.

All of which brings me to Starstruck Today.

Because there is a Starstruck today! Thanks to the miracle of Kickstarter, Starstruck is coming back.

It is important to me to have Harry Palmer’s story, with all it’s grit, hilarity, and heartbreak finally told properly. Harry’s story is my favorite. And I hope it will be yours as well! 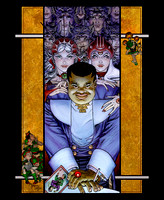